Patient's heart at your fingertips

Any patient can now be kept under full surveillance.


It is widely accepted that poor lifestyle habits contribute to poor health. The question is, how can you know exactly when and how stress is having detrimental physical and mental effects?

Heart rate variability (HRV) indicates what is occurring at a cellular or homeostatic regulatory level. HRV yields precise values of current stress in the body in addition to measuring stress reserves or an individual's stress vulnerability.


Mental demands are emotional, psychological or mental pressures placed on an individual. Stress occurs when these pressures exceed an individual's ability to cope. Stress does not lend itself readily to measurement and therefore cannot be ascertained in any standard units. Although acknowledged to affect health and performance, the result of stress varies from individual to individual (Kasl, 1996).

A reasonable working definition of stress and its potential consequences as applicable to work-related situations can be described as follows:

"Stress is the psychological, physiological and behavioural response by an individual when they perceive a lack of equilibrium between the demands placed upon them and their ability to meet those demands which, over a period of time, leads to ill health."

A degree of pressure can be good for us because for peak health and performance there is an optimal level of arousal or perception and response to demand. However, a greater degree of pressure over a period of time may lead to ill health which may include mental, behavioural and physical changes such as anxiety, sleep disturbance, mood swings, negativity, headaches, and even susceptibility to addiction. Occupational stress is generally accepted as long-term, damaging stress (Palmer, 1989).


Physical demands are pressures exerted on the body by exercise or other forms of physical activity, environmental extremes (e.g. very hot climates), medical problems, and poor lifestyle habits such as smoking or a lack of adequate sleep. Such physical stressors exacerbate mental stressors thereby increasing the overall burden of stress perceived by an individual.

Effects of Stress on the Autonomic Nervous System


When the body is challenged by almost any mental or physical demand or pressure, the brain activates the sympathetic part of the autonomic nervous system and stimulates the output of two hormones: cortisol and adrenaline. These two hormones released into the bloodstream coupled with the activity of the autonomic nervous system help the individual to expend the necessary energy required for re-establishing balance in the internal environment (Brunner, 2002).

Once the demand has passed, the body may regain its normal equilibrium. However, if the demand is sufficiently severe and/or prolonged then the autonomic nervous system may remain in an overactive or underactive state. In this state, the systems involved in rebalancing the body are no longer able to shut on and off when required. Consequently the body becomes less able to cope with demand and more vulnerable to mental and/or physical illness. Burnout is said to occur at this point.

The concepts of stress and burnout are closely related. Even in its broadest definition, burnout is equated with stress and a long list of health and wellbeing variables suggest it is caused by the relentless pursuit of success (Burke & Richardsen, 1996).

The typical pattern of autonomic nervous system imbalance considered to be indicative of stress is increased sympathetic nervous system activity and diminution of parasympathetic activity (Sloan et al, 1994; McCraty et al, 1995; Dishman et al, 2000). In keeping with this formulation, Porges (1995) emphasised the importance of low parasympathetic activity as a key indicator of stress as reflected by low cardiac vagal tone. He wrote:

"Stress would be defined as the autonomic state that reflects a disruption of homeostasis due to depressed parasympathetic tone. Thus the degree of stress can be quantified on a physiological level. Moreover, the chronic autonomic state before a clinical event would index the individual's stress vulnerability; individuals exhibiting problems of homeostasis (i.e., low parasympathetic tone) would have the greatest stress vulnerability."

This new concept in understanding how the body reacts physiologically to stress highlights the need to measure PNS activity as an index of stress vulnerability. Historically, scientists have attempted to measure stress by measuring the activity of the sympathetic nervous system (SNS), which represents only one of the two important components of the autonomic response. However, by monitoring the activity of both components of the ANS it is possible to define not only current stress but also the stress reserve of the individual, the latter being a more useful measure as it identifies an individual's susceptibility to the effect of stress.

The new concept forms the basis of our scientific monitoring capability. Furthermore, this document cites the scientific evidence that individuals who are chronically stressed have less heart rate variability which is associated with reduced parasympathetic nervous system activity.

Stress is an inescapable consequence of everyday living and everyday social interaction. At the clinic, we aim to quantify stress levels and to identify individuals who are vulnerable to ill health due to compromised stress reserves. The objective of QLine is to promote better stress coping strategies for individuals, informing them how to gain control of their ANS and their body's stress response while building stress reserves through appropriate lifestyle changes. 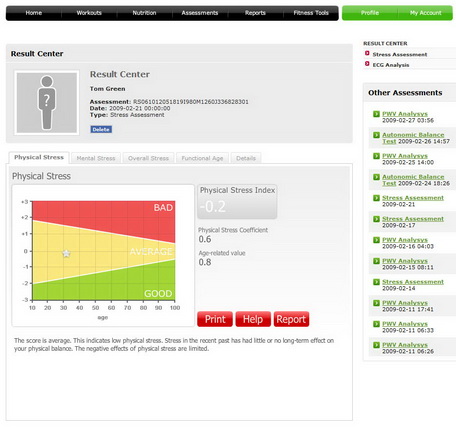 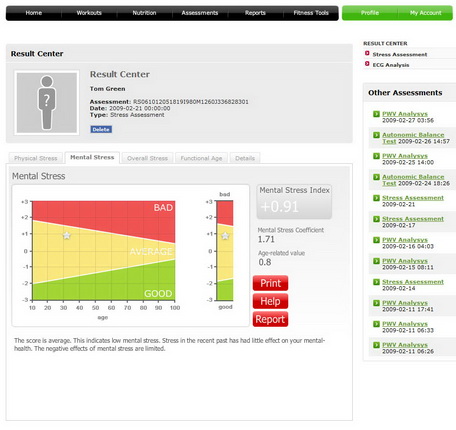 Offers an annual Health Check which gives your valuable insight into their key health indicators.